I am a proud atheist, and a student of a biblical literature. I attend a small Episcopalian school – we have chapel every sixth school day. Aside from my devotional time at school I have stepped into a church exactly 7 other times – 6 when my grandmother randomly feels religious on Christmas eve and once for a funeral, but that is another story entirely. I kinda like the music, but mostly I busy myself counting old people or creating back stories for the single men with children. I never got the whole ‘please may I have a cracker’ bit, but once crossed my arms and walked to the altar with grandma – my mom made me.

In addition to my sincere atheism, I am a sincere lover of stupid movies. My family watches them religiously, pun 100% intended. I saw Year One starring Jack Black and Michael Sera when I was 12. I cried laughing. My brothers and I watch it at least twice a year and it never ceases to leave me shaking.

Unbeknownst to my illiterate Bible self, every joke has a religious reference. I found the potty humor and the absurdity of the story on a whole, wildly entertaining. I had, no joke, no idea that the plot had a basis in anything and now the belly laughs of yesterday have turned into full blown cackles. Still not sure if I am laughing with the movie, or at it.

The other day in class, our teacher told us to turn to the beginning of the Bible, the part where it says, “In the beginning…” We read the section aloud. Wow, pretty friggin weird. It began with some molecules in the primordial soup, right? Adam gets drugged. An organ gets cut out of him and instead of waking up in an ice bath in Mexico, he wakes in the Garden of Eden with a mate, Eve. They eat an apple because a salamander tells them to, and then they get thrown out of the lush garden into the desert with some fig leaves as coverage. They give birth to some psychopathic kids who kill each other. Hmm…

Now I know where we come from.

Basically four old dudes, (Mark, Mathew, Luke, and John) got pretty high on who knows what, pondered existence, and came up with some story to explain the origin of humankind (well it says mankind but its 2018). They created the best protagonist of all time, Jesus. He epitomizes the hero archetype and many can’t find a fault with him. To me I just can’t wrap my head around how everyone bought into the pulp fiction of the time.

My brothers watched Game of Thrones, my mom said I couldn’t – too pornographic. This summer she finally said go ahead. Binge does not begin to describe the rate I devoured the series. 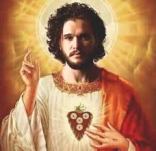 When I started my BibLit class, I couldn’t help but make the comparison between Jesus and John Snow, both act selflessly, both have beards and both are fictional characters. Why not WWJSD or Cersie is my co-pilot or John Take the Wheel bumper stickers? I don’t see much difference between those and the ones on the car with the Trump/Pence sticker and My Boss is a Jewish Carpenter.

I have tried for years to understand other people’s point of views and have been successful on every count but on the matter of our existence.

I sat there with my mouth open wide and my eyebrows up in utter disbelief. Here I might mention that when I laugh, a for real laugh, my whole body shakes and I suck air as if I have whooping cough. Holding back a laugh, a laugh that would have been rude, mean and super satisfying, all I could think was, WTF ever heard of evolution.