Hmmm have I done anything to wreak havoc? Have I not conformed?

Should I write about carving my name into every fresh slab of concrete within a quarter mile radius of my house, 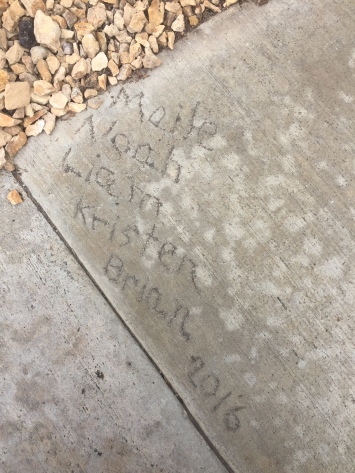 or maybe about my dead of night jaunts through the neighborhood to snip succulents for decorative pumpkins, 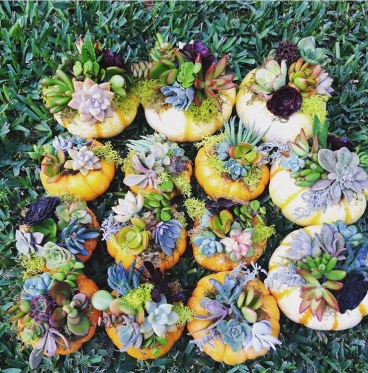 or about the time I showed up at my toddler swim class without my bikini top, or possibly how the sight of a ‘Do Not Enter’ sign compels me to jump over almost any fence. 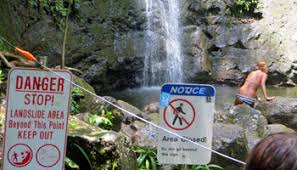 None of these are as interesting as my family’s affinity for street signs.

The year is 1981 and in the starlit Waikiki night my grandfather, a graduate professor of electrical engineering, climbs up the side of a pole barefoot with a wrench in his mouth. He climbs until he reaches the cross bar holding up two large green signs. He takes his

wrench out of his mouth and unscrews the first bolt then the second. Coconut Ave. clatters to the ground, Diamond Head Road soon follows. He puts the wrench back in his m

outh and climbs down the pole.  He takes these signs wraps them up and ships them to my mother in college.

As the two big green signs cross the Pacific, my dad, a student of electrical engineering, too has climbed a pole. Sporting a stud in his left ear and his white cross zip Guess jacket, he sits on the crossbar of a somewhat busy intersection and attempts to unscrew a massive green sign. Being afraid of heights and afraid of getting caught he unwinds the bolts as quickly as he can. Avenida de la Playa tumbles to the ground and he scoots down right behind it.

Fast forward 33 years, those three signs and a few signs my brothers and I have picked up – End of Road Work, Do Not Enter, No Parking, 11thSt Beach, Neighborhood Watch – hang in the garage.

The day is February 11, 2016. A huge storm has just hit San Diego. Flash Floods are as common as cracks in the pavement, winds reach speeds of 60 Mph, palm fronds fly through the air like prehistoric birds before they land, and street lights, lamps and signs wobble and sway. I had attempted to remove Cofair and Marsolan from my horse shoe shaped street of less than twenty houses. I wanted to send it to my brother at college.  But technology had changed since my ancestors’ time. I tried a screw driver, a socket wrench, a monkey wrench but nothing worked. I even tried the bent piece of metal that seems to come with every purchase from Ikea. The tool I needed eluded me.

On this day in February of 2016 the anti-theft bolting technology proved no match for mother nature. With one major gust of wind the sign blew off and rested squarely in the shape of a three-dimensional ‘X’ twenty yards from my driveway. My mother and I driving home, in excited anticipation of another captivating episode of The Great British Baking Show, saw it on the slick asphalt. My mom stopped the car, gave me a look, and I stepped out of the car into the pouring rain. I, not ever planning on being an electrical engineering professor or even an electrical engineering student, grabbed the bulky slippery sign and ran home. I put it in my room and called my brothers, “Guys I got it, I got it, I got it!”

Well, not everyone shared my stoke over one of the greatest heists of all time. The missing street signs generated a fair amount of buzz on the busy-body Nextdoor App. Comments included questions about who took the sign, followed by denigrating asides about the general bad character of anyone who would do such a thing. In the words of Walt Whitman, I felt, “society whip me with its displeasure.” Even months later, when the city had failed to replace the sign, people would post photos of the barren pole and begin anew with the comments on the thief’s character or lack thereof. It is important to mention, again, that there are only 20 houses on our street and the sign in question didn’t even stand at an intersection. It really served no purpose.

I was never able to separate Marsolan from Cofair, so the two remain fused together in a dusty dark part of my garage. In a sense I will remain stuck to them as well, I can’t risk blowback of making my ‘crime’ public.

Emerson and Theroux would rejoice in my decision to fight against society’s norms. The more street signs the more praise from those two. 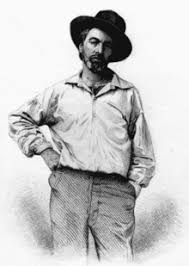 Whitman was born on May 31, 1819 in West Hills, New York. He lived with his two parents and eight siblings in Brooklyn and Long Island through the 1820’s and 30’s. When Whitman was twelve, he began to teach himself the printer’s trade and began reading anything he could get his hands on: Homer, Dante, even the Bible. He worked as a printer until a fire brunt down the whole printing district and ruined the industry.

At the age of Seventeen, Whitman became a teacher in a one-room schoolhouse in Long Island and he continued to teach until he was twenty-two. He realized teaching was not the life for him and he did not enjoy it, so he decided to pursue journalism as his full-time career.

He worked for the Brooklyn Daily Eagleand created his own weekly newspaper The Long Islander. He left the two newspapers behind to become the editor of the New Orleans Crescent. In New Orleans he witnessed the horrors of slavery and when he later returned to New York he founded a “free soil” newspaper the Brooklyn Freeman. 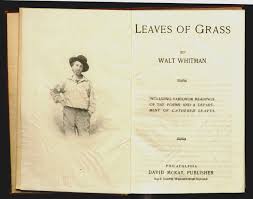 Whitman published the first copy of Leaves of Grass in 1855. It consisted of twelve poems and a preface. He self published it and sent a copy to Emerson, a leading transcendentalist author, in July of 1855. The first edition was not a smashing success, instead much more of a failure. A review published in The Atlantic by Thomas Wentworth Higginson said: “It is no discredit to Walt Whitman that he wrote Leaves of Grass, only that he did not burn it afterwards.” With this negative review and many more like it, Whitman decided to publish anonymous reviews praising the book. It was not until Whitman got a letter back from Emerson that things started to turn around for the book.

I am not blind to the worth of the wonderful gift of Leaves of Grass. I find it the most extraordinary piece of wit and wisdom that America has yet contributed. I am very happy in reading it, as great power makes us happy. It meets the demand I am always making of what seemed the sterile & stingy Nature, as if too much handiwork, or too much lymph in the temperament, were making our Western wits fat and mean. I give you joy of your free and brave thought. I have great joy in it. I find incomparable things said incomparably well, as they must be. I find the courage of treatment which so delights us, & which large perception only can inspire.

I greet you at the beginning of a great career, which yet must have had a long foreground somewhere, for such a start. I rubbed my eyes a little, to see if this sunbeam were no illusion; but the solid sense of the book is a sober certainty. It has the best merits, namely, of fortifying & encouraging.

I did not know until I, last night, saw the book advertised in a newspaper, that I could trust the name real & available for a post-office. I wish to see my benefactor, & have felt much like striking my tasks, & visiting New York to pay my respects.

Whitman took this letter and published it on the back of his second edition of leaves of grass that contained thirty-three poems. This time it was much better received because people loved Emerson and trusted his judgment on books. Whitman Continued to edit and publish new versions of Leaves of Grass throughout his life.

At the start of the Civil War, Whitman worked as a freelance journalist and visited hospitals that were treating wounded soldier. In 1862, he visited his wounded brother in Washington D.C. The amount of suffering the young men in these hospitals was shocking to Whitman and so he decided to work in the hospitals and try to help the wounded. He worked in the hospitals for eleven years and found a job as the clerk for the Department of the Interior. He was later fired from that job because the Secretary of the Interior found out he was the author of Leaves of grass and took it to be a very offensive collection of poems. Whitman was never financially secure and had to take loans from prominent writers in England and the Sates. He had to give money to his widowed mother and also spent an excess amount of money on the soldiers in the hospitals.

In the 1870’s Whitman went to visit his dying mother and he suffered a stroke. He was forced to live in Camden, New Jersey with his brother until the 1882 edition of Leaves of Grass was published and he could afford to move into his own house. On March 26, 1892 Walt Whitman died in a clapboard house in Camden, New Jersey.

As we would expect, he went out with a bang and was buried in a tomb designed by none other than himself.

“Waves are not measured in feet and inches, they are measured in increments of fear.”- Laird Hamilton